Comments on the Delta Tunnels environmental documents are due today.  Here is a summary of my comments, which focus on two issues that severely bias the analysis in favor of the tunnels.

Posted by Jeff at 9:59 AM No comments:
Email ThisBlogThis!Share to TwitterShare to FacebookShare to Pinterest
Labels: delta tunnels, Delta water exports, peripheral canal

How many commuters are there between Sacramento and the Bay Area?

Barry Broome has brought new energy to marketing Sacramento through the new Greater Sacramento organization, and a big part of his strategy appears to be aggressively targeting Bay Area firms.  His favorite factoid is that there are over 100,000 Sacramento commuters to the Bay Area, and 200,000 going back and forth between the two regions.  Since he started citing these figures months ago, I have received a number of inquiries asking if that number is correct.  The figure popped up in two more stories this week (here and here).

My answer is that it depends on how you define commuting.  The best estimate of the number of people physically commuting is about 1/3 of the figure Greater Sacramento is quoting, and the largest destination for these Sacramento commuters is Solano County - which may be the Bay Area but is not Silicon Valley.  As someone who spends a lot of time traveling between Sacramento, Stockton, and the Bay Area, I can attest from experience that the commuter traffic is much worse over the Altamont Pass to the North San Joaquin Valley than through Dixon to the Sacramento area.  The Census Bureau estimates of commuting patterns, known as CTTP and shown below, back up this personal experience on the highways. 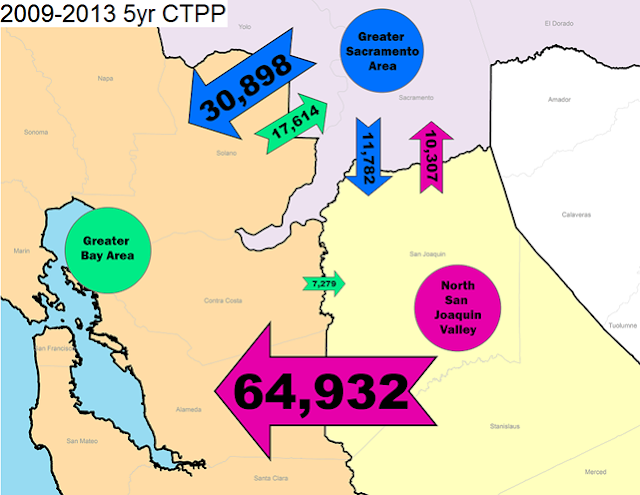 But Greater Sacramento did not make up the number.  The 100,000 figure comes from a huge dataset, known as LEHD, and as shown in the figure below, it offers a much different perspective on worker interchange between regions.  LEHD is based on employer tax filings, matching the place of employment as recorded by employers to employees addresses.  In contrast to the Census data, LEHD shows more Sacramento area residents have paychecks originating from San Francisco, Alameda and Santa Clara than Solano Counties. Another interesting difference between LEHD and CTTP is that LEHD shows much larger flows in the "reverse commute" from the Bay Area inland to Sacramento and the North San Joaquin Valley. 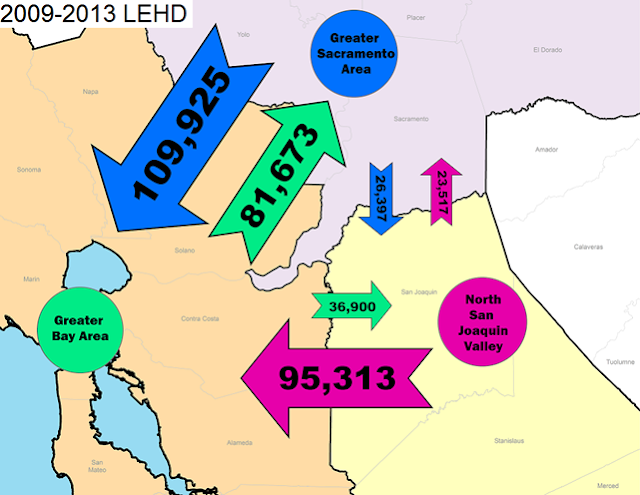 While LEHD is in some ways a more detailed data set of economic connections, our Center has found it to have a lot of misleading information on work locations when trying to use it over the years and prefers the CTTP data, as do many transportation planners.  LEHD administrative records do not always match actual work sites, and it also includes telecommuters who work from home, as well as construction workers, sales reps and others whose work location is constantly changing.

As a personal example, my wife works remotely for a North Carolina based consulting firm, but hasn't actually been to the administrative office in a decade.  She spends her day communicating with people in Florida, Seattle, and Pennsylvania about project sites located in New Jersey, Wisconsin, and Oklahoma.  According to LEHD, she "commutes" from the Sacramento area to the Raleigh, NC area, not 15 feet to the home office.  LEHD also shows me as a commuter from Sacramento to Stockton, but I mostly commute within the Sacramento area.  Most people that I know in the Sacramento area who work for Bay Area employers are in similar arrangement, they only go to the Bay Area a few times per month - and work remotely, travel to clients and sites in various locations, etc.  These people are economically connected to the Bay Area, even if they aren't physically moving between regions that much.  But these additional workers picked up by LEHD that are not included in CTTP are not necessarily a workforce that would prefer a Sacramento employer to shorten their commute as they are sometimes marketed by economic developers.  LEHD is a valid and interesting measure of economic connections, the flow of paychecks between regions, but it overestimates commuters.

Thus, I would recommend taking the 100,000+ commuter figure with a pinch of salt.  It is a count of Sacramento area residents receiving paychecks from Bay Area addresses.   However, I think Greater Sacramento's overall message to market in the Bay Area and talking about growing inter-regional connections and partnerships are correct.  I believe there is increasing recognition in the Bay Area that inland areas, both Sacramento and the North San Joaquin Valley, are going to have a larger role in the Bay Area's economic future - and that the relationship will be deeper than just commuters.  The Northern California Mega-region will be emerging in the coming years as a more integrated entity.
Posted by Jeff at 12:17 PM No comments:
Email ThisBlogThis!Share to TwitterShare to FacebookShare to Pinterest
Labels: Economic Outlook and Data, State and Local Government

At it's next meeting, the Delta Stewardship Council (DSC) will be considering four draft Principles for Water Conveyance in the Delta contained within a larger statement of principles on conveyance, storage and operations.  Considering that the proposed Delta Tunnels would be by far the most expensive water infrastructure project in California's history (construction costs currently estimated at $16 billion and rising), and cost is increasingly at the center of its controversy, it's pretty surprising to me that the DSC continues to ignore it.  The omission is particularly noticeable since the DSC does not hesitate to focus on cost for other, much less expensive, water infrastructure like storage and levees in the same document and meeting.

Here is my short summary of the 4 principles.
No mention of costs, just a list of benefits.  And even this list of benefits is notably absent a valuation of these benefits relative to the costs of the conveyance improvement.  Does it make sense to reject a project that only achieves 3/4 of the principles even if it is 10% of the cost of a project that goes 4/4? After all, we are mostly talking about irrigation water - it's not life or death.

Some state officials try to duck the cost issue by stating that it isn't their business and it is up to the water agencies to decide if they want to invest in the tunnels.  That argument naively assumes that there is no link between paying the Tunnels' mammoth costs and all of the other DSC goals that are explicitly their concern such as operations, reducing reliance on the Delta, ecosystems, water quality, investment in levee integrity, and more.

Here are some constructive suggestions for edits/additions to these principles.

Revised #4: Must have a finance plan that clearly demonstrates that the cost of improving conveyance will not adversely effect the ability of agencies to finance other integrated water management projects, including enhanced storage and projects that reduce reliance on the Delta.

#5: Must have a finance plan that does not increase the incentive to export more water from the Delta.  The plan must show that the project is cost-effective at levels of water exports that protect the Delta ecosystem.

#6  Benefits beyond the co-equal goals (e.g. public safety, recreation, Delta as a place) are recognized and encouraged.