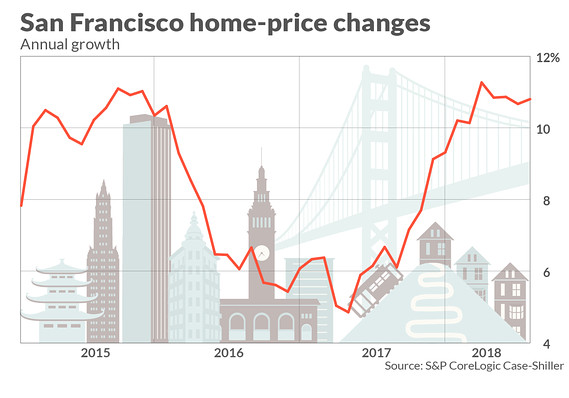 For a few years (2016, 2017), Valley housing costs were rising faster than the Bay Area, narrowing the gap.  Now it appears that the housing cost differential between the Bay Area and inland areas is widening again which along with rising mortgage rates, increases the incentive for middle class households to migrate inland.
Posted by Jeff at 11:11 AM No comments:
Email ThisBlogThis!Share to TwitterShare to FacebookShare to Pinterest
Labels: Economic Outlook and Data, Housing

New WaterFix Economic Analysis is Even Worse Than I Originally Thought

It turns out my initial reaction to the Brattle Group's latest WaterFix benefit-cost analysis was too nice.  I am receiving feedback that the sea-level rise analysis that the Department of Water Resources' touts as "innovative" assumes WaterFix is operated in ways that harm fish, would violate state and federal laws, and contradicts the commitments that DWR is making about WaterFix to the State Water Resources Control Board and other regulatory bodies.  My quick take didn't mention any of these important fish or legal issues.

This quote from the Brattle/Sunding report explains its justification for estimating an enormous new sea-level rise benefit from WaterFix.


"DWR modeling indicates that Delta exports are highly sensitive with respect to sea level rise. A rise in sea level means more salinity intrusion from the ocean via the San Francisco Bay, affecting the water quality of exports and requiring more fresh water to be released from upstream reservoirs to meet salinity standards. By 2100, a 2-foot sea level rise becomes a more important contributor to reduced annual south-of-Delta export than does annual inflow change, a result also shown by Fleenor et al. (2008).  The DWR study published by Wang et al. (2011) concludes that sea level rise can be expected to reduce Delta exports by over 119,000 acre-feet annually by mid-century, and by over 520,000 acre-feet annually by 2100. Construction of the WaterFix would prevent these losses by giving water managers the capability to divert water directly from the Sacramento River upstream of the Delta.”

I asked several knowledgeable experts if this was legitimate and received a resounding "No."  Here is an example,

There is no reason to think that building the tunnels will allow a change in water quality standards.  Those standards protect fish and wildlife (the “X2 standards”) and in-Delta agricultural, municipal and industrial uses.  The studies Sunding relied upon (without any apparent understanding on his part of how they were done, what they mean and what their assumptions were) show that with expected sea level rise and assuming no islands flood and all channels get deeper—so they continue to be dredged to the same levels as they are now even though they don’t need to be—more outflow will be needed to meet the current water quality standards.

Sunding assumes, quite incorrectly, that with the tunnels the extra outflow caused by sealevel rise can instead be pumped through the tunnels, which means the Delta gets saltier and the water quality standards won’t be met.  That would be a disaster for fish, wildlife and those in the Delta who rely upon it for water.  Assuming the water quality standards go away because the tunnels are built is either fantasyland or the worst fears of the in-Delta water users and enviros.  It means either Sunding has no clue about Delta water quality and the reason for those standards, or he and his clients think they can fool people into thinking this project works economically or he and his clients are completely disingenuous about their intentions once the tunnels are built.  So once again, Sunding’s assumptions are complete BS.

Summer 2012:  After the initial analysis of economic benefits of the Delta tunnels (water supply, water quality, and seismic risk reduction) falls far short of its costs, Sunding/Brattle unveil a new 4th category of benefits bigger than all the rest combined:  "the value of regulatory certainty."  The justification for the benefits are the regulatory assurances that are part of a habitat conservation plan under the ESA.  Critics call regulatory certainty a BS assumption.

Summer 2015:  DWR releases new EIR and revised tunnel plan that shifts from BDCP habitat conservation plan to tunnels only WaterFix.  The new EIR also has substantially lower water supply benefits compared to no action.  Both these changes substantially impact the economic benefits of the tunnels, and DWR promised a new economic analysis within months but never releases it.

Fall 2016:  The suppressed 2015 economic analysis comes out in a public records request.  In order to get a positive B-C ratio in this report, Brattle/Sunding assume away $6.5 billion in costs by assuming a massive, unjustified subsidy.  They also assume the water supply benefit of the tunnels are more than 5 times higher than estimated in the EIR/EIS by continuing to assume the tunnels are exempt from future regulations that are certain without the tunnels.

September 2018:  As the economics of the tunnels get worse, the ridiculous assumptions needed to generate a positive benefit-cost ratio get bigger too.  The analysis released last week embeds a number of inaccurate assumptions:

This afternoon, the Department of Water Resources released a new report from the Brattle Group, "Economic Analysis of the WaterFix: Benefits and Costs to Project Participants."  I gave it a quick review this afternoon, and judging by my inbox, there is high demand for instant analysis - so here it is.

This report is different in several respects from previous analysis of earlier versions of WaterFix by the same consultants.  These 4 points highlight this new information.  The 1st and 4th bullet points in this list are going to cause trouble for the Metropolitan Water District (MWD) in the recent Prop 13 and Prop 26 lawsuit filed against them.
(The % costs is a range because it is unclear whether table 6 or 7 is comparable to the water yield estimates in table 2.  Either way the urban to agriculture subsidy is clear.)

Serious problems with previous reports, especially the use of a deceptive no project baseline to artificially increase water supply benefits, are repeated in this report.  I have written about that extensively elsewhere and will not repeat it here.  I may amend this analysis later once I have time to review in more detail.
Posted by Jeff at 6:22 PM No comments:
Email ThisBlogThis!Share to TwitterShare to FacebookShare to Pinterest
Labels: delta tunnels, Delta water exports, peripheral canal, State and Local Government

Should Scenario Planning for Bay Area Prosperity and Social Inclusion Include the Mega-Region?

The Bay Area urbanist think tank SPUR recently released a provocative report that lays out 4 future scenarios of the Bay Area in 2070.

Inland areas in Northern California only appear in 1 of the 4 scenarios, "Gated Utopia: Economic prosperity + Social Exclusion."  This is the first of 4 scenarios presented, and it SPUR seems to be suggesting that it is where current trends are taking us.  After a mostly positive description of life in the Bay Area in 2070, it turns to the North San Joaquin Valley.


"Outside the core of the region, it’s a different story. Service workers endure long, crowded commutes from a sprawling supercity in the northern San Joaquin Valley that encompasses the formerly separate cities of Tracy, Stockton, Manteca and Modesto. Among its neighborhoods of inexpensive single-family homes, the supercity includes a number of shantytowns and tent cities"

The most positive scenario that SPUR creates is called "A New Social Compact Economic Prosperity + Social Inclusion."  In it, Bay Area communities allow much greater housing densities, adapt to smaller living spaces, but enjoy broadly shared economic growth as the population grows beyond what anyone thought imaginable for the region.  Inland areas of Northern California are left out of this vision.

This is surprising to me, since SPUR was one of the first to write about the Northern California Megaregion concept in a 2007 report that influenced my thinking about Northern California not long after I moved to the region from the East Coast in 2008.


"Our perspective is that the megaregion approach will help create new middle-income opportunities that spread the prosperity of California to a broader range of households and communities. While the competitiveness of the coastal regions in the Northern California megaregion depends on our leading edge universities, entrepreneurs and an abundance of risk capital, the economic opportunities for the inland regions of the state will depend on building bridges to these innovative industries, particularly in manufacturing and other industries."

The 4 scenarios in the new SPUR report are designed to provoke discussion and debate, and it has.