Fresno is the only place in the Valley where I've heard any optimistic talk about a turnaround in home building. Some quotes from an article in this weekend's Fresno Bee.

Lennar Homes bought dozens of finished lots from other developers in five deals in November and December in Fresno and Visalia. "We're sensing an upswing," division President Mike Miller said,

If I were a developer, I would agree that Fresno is the only area between there and Sacramento where I would be interested in finished lots right now. Here are some graphs of vacancy rates (according to the Postal Service) we discussed in our latest forecast. Note that Fresno residential vacancy has not increased much in the past 2 years, it looks more like the Bay Area than the Valley. 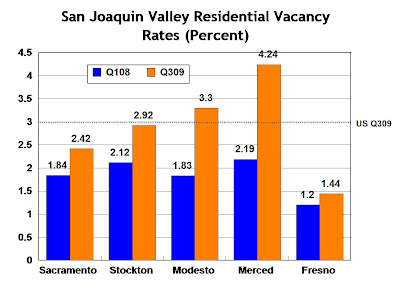 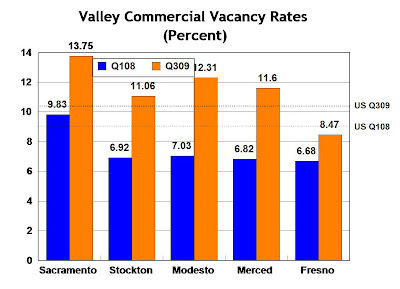 This is one of the reasons why we feel Fresno will be the first of these 5 Valley metro areas to recover from the recession. Here is a link to the Fresno Bee's article on our forecast released earlier this month, "Economic forecast less grim for Fresno".
Posted by Jeff at 10:19 AM
Email ThisBlogThis!Share to TwitterShare to FacebookShare to Pinterest
Labels: Economic Outlook and Data, Housing and Foreclosures