Time to wake up the blog.  Tales of foreclosure homes being stripped of appliances, fixtures, anything of value have been commonplace in the Valley for years.  However, the story of the bankrupt Indalex Aluminum Plant brings a whole new dimension to the Valley "recycling" industry.

Here are some snips from articles and commentary in the Modesto Bee, and a photo of the plant after the roof collapsed due to scavengers removing steel support beams. 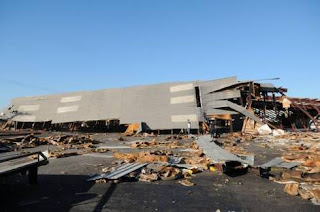 
I don't think the demolition of the former Indalex building in north Modesto is what anyone envisioned when coining the slogan "Recycle — It's Good for the Environment."

Really, who thought you could tear apart a structure and turn it in for California Redemption Value, like an empty Pepsi bottle?

Under any circumstances, it's embarrassing to the community. The blatant theft continues, with women taking lunches to their husbands or boyfriends at noon.

The images of Indalex exude a post-apocalyptic ambience like you'd see in "Mad Max" or any other doomsday flick. At the very least, it reminds me of an episode of M*A*S*H in which Radar O'Reilly mailed home a Jeep piece by piece.

Except these folk are stealing an entire building in broad daylight, and without fear of arrest, retribution or lawsuit. They aren't even sneaky about it. No need to work nights.

They've stolen so much metal that a large part of the roof caved in last week. The place is extremely hazardous both structurally and environmentally.

Yes, the economy is dreadful, unemployment is sky high and they have families to feed. But theft is theft, and it doesn't matter whether they're stripping an abandoned building, pilfering the copper wiring from the heating/AC units atop the United Way, which happened last year, or stealing it from taxpayer-owned parks, which happened last month.

But is it stealing if no one owns the property?  Victimless crime? Sheriff's hands tied as scavengers strip abandoned plant (October 11)

A dozen or so scrap metal scavengers "go to work" every day at an abandoned north Modesto industrial building, ripping the place apart to harvest the tin, iron, steel and other recyclables for quick cash. No one stops them.

Because nobody admits owning the 9-acre property, law enforcement officials say there is no victim, so no one can be prosecuted...

"I started scrapping here maybe eight months ago," said Michael Bennett, who uses a blow torch to melt metal pieces off the walls and roof. "I do it to feed my family. I've got two kids."


Bennett said the first guys who ripped into the building got rich removing perhaps $100,000 worth of copper.
Far less profitable metalsremain, but plenty of folks willingly help themselves to what's left.

"We have an average of 10 to 15 guys a day coming out here," said Rueben Zuiderduin, an articulate young man who said he is a trained chef. "The only reason I'm doing this is because I'm out of work."

Zuiderduin labored with a torch much of Monday to dismantle an iron grate, which he reportedly sold for a disappointing $69. During the last month, he said he hasn't made more than $1,000 off Indalex scrap.

None of the dismantlers were hiding their activities when The Bee visited the site.

Some reported earning an OK living off the building, and they don't think they're doing anything wrong.

"I'm scrapping it out for my Uncle Sam," said one shirtless man who wouldn't reveal his name. "If Uncle Sam sent people here to demolish this place, they'd be in full hazmat suits and it would cost a fortune."

After spending the day ripping apart the building's siding or other metal pieces, the man said he trucks his cargo to "any number of scrap metal places" that pay him $100 to $150 for his haul.

"I treat it like a job. I come in during the morning, work all day, haul off, cash in and go home," the man said. "Nothing here is free. It takes a lot of work to do this."

"It's a hazardous eyesore, and nobody's doing anything about it but us," Zuiderduin said. "Everybody is happy we're doing this. The companies across the way, the police and the sheriff are fine with this."

He's wrong about that.

Stanislaus County Sheriff Adam Christianson said he has met with angry owners of neighboring properties about the demolition at Indalex, but there's little he can do.  "They're taking property that doesn't belong to them. That's a crime, but without a victim, I cannot arrest them and the district attorney cannot prosecute them," Christianson explained


Metal scavengers hauled off steel support beams, causing the roof to collapse at an abandoned industrial building in north Modesto. But that hasn't stopped the unauthorized dismantling of the 125,000-square-foot Indalex aluminum manufacturing plant.

While the toxic chemicals, contaminated air and treacherous footing hasn't deterred looters, firefighters and ambulance crews are being ordered to stay outside...

The scavengers are unrepentant about helping themselves to anything of value there.

"It feeds the family," said HectorBonilla, 24, of Modesto, who has been a "recycler" for about four years.

Bonilla said he has been cutting up and collecting tin at Indalex for a week. The two loads he sold Tuesday to scrap metal dealers earned him $400. He anticipated making $200 on Wednesday.


Modesto fire crews responded to a blaze at the large, debris-filled shell of the old aluminum manufacturing plant at about 3:45 p.m. Wednesday. When they arrived, a 20-foot by 20-foot former paint booth inside what used to be the building was ablaze.

Modesto Regional Fire Authority Division Chief Sean Slamon said when crews arrived some 30 unauthorized metal scavengers were still working at the site, despite the nearby flames. Stanislaus County sheriff's officers had to disperse the people dismantling the plant.

Posted by Jeff at 1:04 PM
Email ThisBlogThis!Share to TwitterShare to FacebookShare to Pinterest
Labels: Economic Outlook and Data, State and Local Government