The Scenario Modeled in the New PPIC Delta Report Doesn't Look Anything Like the BDCP or the Delta Plan.

Before anyone reads the summary of the new PPIC report and concludes that Delta residents don't have much to fear in the BDCP or the Delta Plan, they should understand exactly what the PPIC has modeled.  When it comes to the big issues of water quality and habitat, it looks more like the recommendations of the Delta Protection Commission's Economic Sustainability Plan than the BDCP.

1.  They assume water exports through a dual conveyance system will average 4.9 maf per year (see page 36 and 40) matching the 1980-2000 period.  This is barely any increase over the constraints on through Delta pumping under the Biop.  So, yes, under those operating assumptions dual conveyance would have a relatively small impact on Delta water quality.  But does anyone really think that exporters will pay billions for conveyance that delivers 4.9 maf?  My understanding is exporters have made it pretty clear that they won't, and draft BDCP documents and the superficial discussions of finance suggest substantially higher exports of 6 maf or possibly more.  On page 40 they do note that some exporters are seeking 6 maf, but that is not what they modeled in their report. 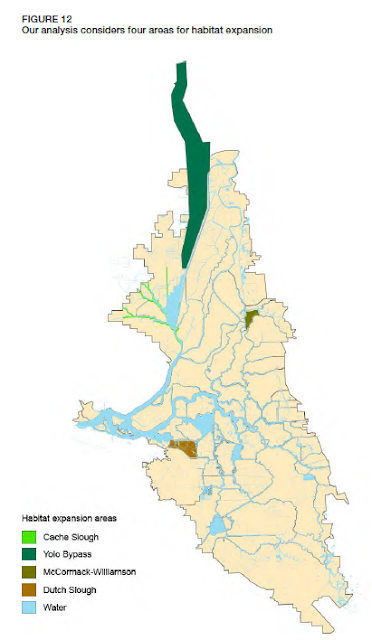 2.  The baseline habitat resoration they are modeling doesn't include most of the tidal marsh or really any of the costly elements of the proposed BDCP or Delta Plan except for the Yolo Bypass enhancements.  The picture is at the right.  Does it look like BDCP or even any of the other PPIC Delta reports?  In Table 1, note that there is no loss for habitat conversion in all of San Joaquin County (the majority of Delta ag) and virtually none for Solano County (the Cache slough area).

So if there is no water quality degradation and no tidal marsh, the economic costs to the Delta can be manageable.  That is exactly what the DPC Economic Sustainability Plan recommends, and if you added a south San Joaquin bypass around Paradise Cut to the picture at right, it would pretty closely match the ESP recommendation for habitat.  But that is not what the BDCP, DWR, other PPIC reports, and the Delta Plan are talking about.

PPIC should be more clear about what they are modeling, because the language they use in their summary makes it sound as if they find current policy proposals (which are BDCP and Delta Plan) have only a 1% impact on the Delta economy (15% in the primary zone).  That's not true, unless these plans have undergone some dramatic recent changes.

It should also be noted that some significant infrastructure related impacts aren't considered.  But I will leave that and discussion of more technical economic issues for another time and forum, and after I have had more time to digest what they have done.  Some of it is pretty good, and not much different than our own work.  This post is an initial impression from a quick read.
Posted by Jeff at 6:21 PM
Email ThisBlogThis!Share to TwitterShare to FacebookShare to Pinterest
Labels: Delta water exports, peripheral canal