The latest PPIC Delta report includes the results of an interesting survey of scientists and stakeholders on options to improve the Delta ecosystem.

Looking at the key table of findings (table 2, page 14), the tunnels are down in the bottom right of the PPIC table, low potential impact for fish, low scientific consensus, and high cost.  It is the worse possible outcome in this ranking (upper left quadrant is best, lower right is worst).  Nevertheless, the PPIC calls the BDCP "promising" even though it is completely focused on the lowest ranking, most controversial option, and unnecessarily ties many of the more valuable, less costly, and less controversial habitat measures into a package with the tunnels. 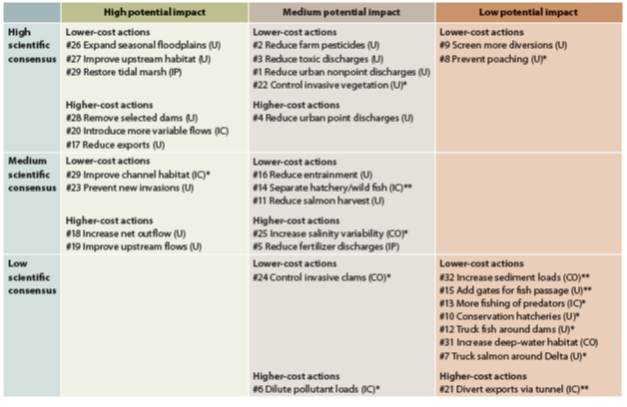 As I have stated repeatedly, the ESA does not require the tunnels!  The state can and should develop strong no-tunnel options for the BDCP.

Although the tunnels fared terribly in their survey, the PPIC does not highlight that conclusion.  Instead they offer reasons they think the tunnels are better than they look in this ranking.  For instance, they talk about how the measures interact with one another, but they do so in a biased way - pointing out how the tunnels might support some measures while omitting how they work against other measures.  For example, on page 14, they state "If managed for conservation objectives, a tunnel could facilitate more variable flow patterns (#20) and reduce entrainment (#16)—two actions scientists consider quite promising."

What is the offsetting factor that they leave out?  The tunnels conflict strongly with the strategy of reduced exports (#17) which was also one of the highest ranking options for effectivness.  Their study finds that reducing exports has both higher environmental benefits and lower costs than the tunnels, thus I find it strange that they keep advocating the tunnels over reduced export strategies.  It is clear that exports will not be reduced with the tunnels, and will likely be increased from current levels.

Two other quick observations from the new PPIC report:

1.  Water exporters received, by far, the lowest grade for scientific knowledge of any of the stakeholder groups.  They even got a negative score for 2 out of 3 categories!  At least the Delta folks got a passing grade.  Table 7 from this supporting report has the results.

2.  The cost of the tunnels are only $$$!  Why did they use these 3 cost ranges with symbols? , $, under $10m annually, $$, 10m - $99m annually, and $$$, is $100m or more.  Why didn't they put numbers for the estimated cost ranges in the table?  And if they are going to use symbols, they must have a consistent meaning.  This is the kind of PR garbage that professors routinely mock in the first week of statistics.  It makes it look like the cost of the tunnels are not that high, even though they are orders of magnitude higher than measures that received the same symbolic rating.  It is reminiscent of the early BDCP screening studies I criticized for their biased, pro-tunnel analysis.  See this old post, "Would BDCP staff accept dots instead of dollars in their paychecks?"

If a $ equals an annual cost of $10 million, then the cost of the tunnels is not $$$, but ranges from approximately