While I have a long record of saying that drought impacts on the economy tend to be overblown, even I was surprised by the minimal drought impacts in the data released this morning.

The Bureau of Labor Statistics' Quarterly Census of Employment and Wages is the most reliable data on employment (it is a census of quarterly tax filings).  Data for the 3rd quarter of 2014 was released this morning, representing the peak season for farm employment when drought impacts should be most evident.  As shown in the table I compiled below, there is virtually no difference in farm employment between 2014 and 2013 in the 3 counties that are thought to be most devastated by the drought. (Jobs are listed under each month in the table, NAICS sector 11 is 99+% agriculture in these counties, the increase in total wages suggest decreased hours is not a big part of the explanation even though the minimum wage increased on July 1, 2014.) 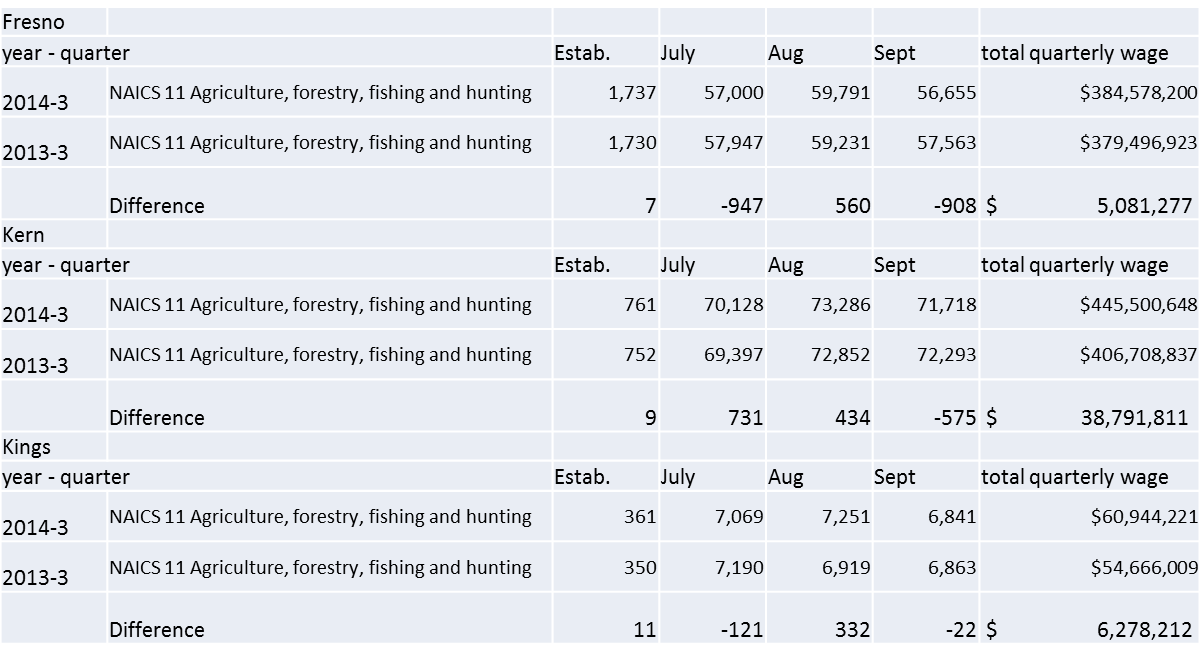 There is more data that needs to be compiled before jumping to conclusions, but I think it is important to get this information out there since the rhetoric on jobs, unemployment and water shortages is heating up again.

In my view, the impacts of drought are much larger in environmental data such as plummeting fish abundance, than in jobs.  I surprised a reporter earlier this week when I said that I thought the drought was a bigger environmental crisis than an economic one, and the recent data about 6 delta smelt found in the recent survey compared to virtually no change in agricultural jobs is an example.

How to explain this?

As I said, there is more data to sift through, but it is important to recognize that this drought is coming in the midst of a strong expansion period of Valley agriculture.  The total number of acres irrigated and harvested has been growing every year for most of the past decade, even in the face of scarce surface water.  Thus, in the absence of drought, I suspect 2014 employment would have been even higher.  The drought is causing significant fallowing of relatively low value, and non-labor intensive field crops, while new acreage is coming into production by tapping groundwater.  Thus, there are farmers laying people off, I don't think the farmers in news reports are lying.  But clearly, there are others that were hiring.  In other words, the baseline for agriculture activity is rising, as I discussed last spring in this post.
Posted by Jeff at 1:03 PM
Email ThisBlogThis!Share to TwitterShare to FacebookShare to Pinterest
Labels: delta tunnels, Delta water exports, Economic Outlook and Data, water bond