The Consequences of a Massive Earthquake-Induced Delta Flood


The tunnels' PR campaign and some state leaders, including Governor Brown, talk about the catastrophic delta flood scenario as if the only consequence is water exports.  Given that the direct devastation of such an event would be in the Delta itself, there are some serious economic and moral problems with this argument that should be raised given it is the main argument made for the controversial tunnels.

The source usually cited by tunnels advocates for the earthquake risk is the DRMS Phase I study which assessed flood risk and consequences in the Delta.  Its assessment of levee failure probabilities was highly controversial but I will ignore that debate here, and focus on the consequences analysis.  The report described the consequences as follows in the fourth sentence of its executive summary.


"Levee failures and the flooding that follows can cause fatalities, destruction of property and infrastructure, interruption of a large portion of California's water supply, environmental damage and statewide economic impacts."

The first thing it mentions is fatalities, the second is property and infrastructure destruction in the Delta, and the third is water supply.  The DRMS authors put that list in the proper order, as public safety is typically given the highest priority in risk-assessment and the DRMS analysis found that the economic loss to property and infrastructure exceeded the economic loss from interrupted water exports.  Here are the Figures from the reports' executive summary that outline the public safety and economic costs. 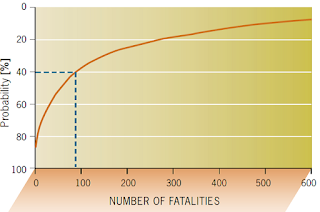 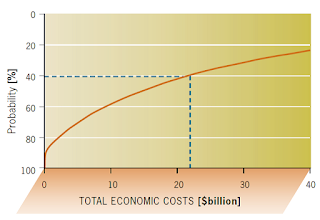 For comparison, Katrina killed over 1,800 people and caused hundreds of billions in economic losses.  The 1989 Loma Prieta earthquake in the Bay Area killed 62 people and caused over $6 billion in structure damage and more in total economic costs.  DRMS describes a horrific scenario that could be worse than Loma Prieta and smaller than Katrina, but with a similarly devastating mix of fatalities and economic costs.  However, the public discussion of the Delta scenario is driven by water exporters and focuses almost exclusively on economic losses, whereas discussion of these other events have focused much more on life loss and public safety.

In recent years, I have heard informally that subsequent modeling has shown that shut-down of the export pumps in this Delta flood scenario are more likely to be weeks or a few months, rather than years that are more often heard in the media.  DWR Director Mark Cowin has recently said weeks and months.  I am aware of this presentation to BDCP from a few years ago that supports weeks and months.

I am not aware of any more recent analysis of fatality risk.  Perhaps that would decline in a more recent assessments as well - especially if the levee failure probabilities have been reduced to account for the lower frequency of floods seen in the past decade and levee and emergency response improvements.  However, it should be noted that the fresh water inflows which reduce the length of water export outages in some cases could still be just as devastating to lives, property and infrastructure in the Delta.

In this recent Bee op-ed, my language on this issue was probably too strong, and I would have toned down my earthquake statement if I had known the Bee was going to use it as a call out subtitle.  But this earthquake, salt water, shut-down the pumps argument has once again become the principal case for the tunnels' made by many state political and business leaders.  If that is the main argument, then it needs to face more tough questions about its economic, technical and ethical merits.

Addendum, July 29:
I realize I failed to include a graphic that shows DRMS found water export interruption was only 20% of the cost.  It is tedious to tabulate this from the appendices, but it is relatively easy to derive from this table from DRMS Phase 2 report (taken from Table 18-2). 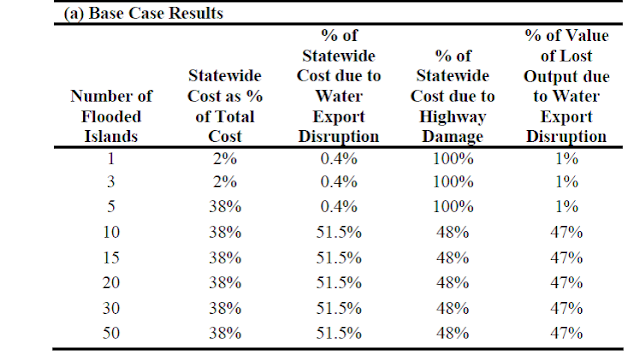