Farm Revenue Drops as Labor Costs Rise: Is the Era of Record Farm Profits Over?

Two interesting news stories about California agriculture this week.  First, initial estimates for 2015 farm revenue show revenues dropped sharply by $9 billion in 2015 compared to 2014.  Second, a bill that would align overtime regulations for farm laborers with all other workers passed the legislature and is on its way to Governor Brown.  If the Governor signs it, this will increase costs for farmers and comes just after the state approved large increases to the minimum wage that will likely have even bigger impacts on farm costs.

A couple of graphs help put the news in perspective.  The first shows total revenue and the net income of farms in California over the past 20 years according to the USDA data series released this week.  The data is adjusted for inflation, all values in 2009 dollars.  As the graph shows, farm revenue has increased sharply since 2011, and profits (net income) for the period of 2011-14 were at all time highs.  While the 2015 results are down sharply from the previous year, they still look very good from this historical perspective.  Expectations are for another decline in 2016, despite much less fallowing from drought.  If the 2016 drop isn't too large, it may just be that farming revenue is returning back to trend growth after an anomalous 2011-14 period were prices were unsustainably high, and that nut prices finally came down in response to a decade of massive increases in production. 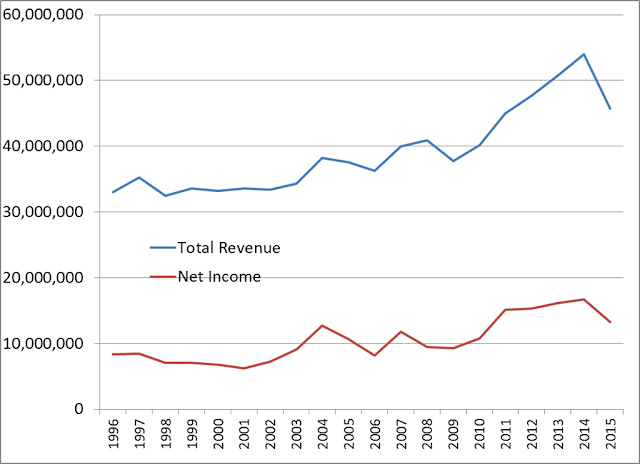 The next graph only goes until 2014, and shows labor costs and net income as a percentage of total farm revenue.  In 2014, labor costs (the sum of farm employees and contract labor costs) was about 32% of California farm revenue, making it the largest cost category for California agriculture.  This percentage varies significantly from crop to crop, with the highest labor costs for vegetables and fruits and the lowest for field crops.

Historically, profit margins have been about 25% and labor costs about 35% but there are big fluctuations as farm revenue can be volatile.  What will big changes in labor costs due to minimum wage and overtime regulations do to this picture.  If nothing else changes (meaning farmers did not adjust their labor usage, crop choice, and technology as labor costs grow), the minimum wage increase and overtime regulation would likely push the labor share up to nearly 50% of revenue, and profit margins would drop to about 15%.

Both numbers would be at or near records. That's a major shift, certainly enough to drive substantial changes in agricultural practices.  There is going to be a lot of interest in labor-saving or productivity enhancing capital and technology investments in the agriculture sector over the next decade.  That will reduce jobs, but should lead to better, higher-paying jobs. 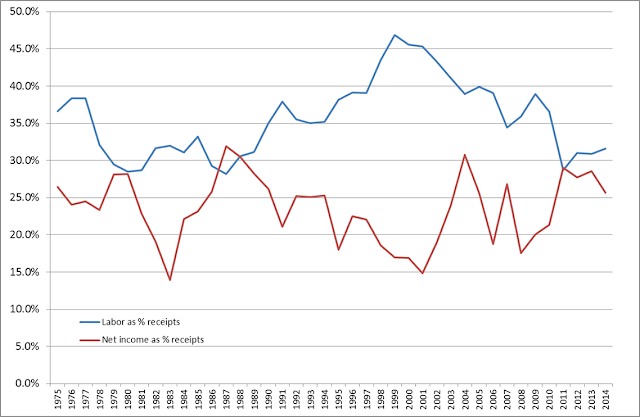 So what should Governor Brown do?  I am very sympathetic to the overtime rule and aligning labor standards across industry.  I don't see how the current rules can be seen as anything but discriminatory, so my views are the same as they were in this 2010 post when the legislature sent a similar bill to Governor Schwarzenneger.

Having said that, I was alarmed that the minimum wage increase passed this fall did not allow for regional variation in the state like was done in Oregon.  In my view, $15 per hour is too high for places like Fresno and Redding even though it may make sense in the Bay Area.  There is a chance that the legislature could revisit this issue before the largest increases hit, and I would encourage them to make the $1 annual increases that begin in two years, 50 cent increases in inland regions so that the final phased in minimum wage is $12.50 not $15 in the Valley.

I am not an expert in the political process and how negotiation between the Governor and the legislature work.  I do know the outcome I would eventually like to see:  a) minimum wage increase for the Valley adjusted from $15 to $12.50, and b) farmworker overtime regulations normalized to be aligned with other industries.


Posted by Jeff at 11:57 AM
Email ThisBlogThis!Share to TwitterShare to FacebookShare to Pinterest
Labels: Economic Outlook and Data, State and Local Government